Published under a pseudonym, J. K. Rowling's brilliant debut mystery introduces Detective Cormoran Strike as he investigates a supermodel's suicide in "one of the best books of the year" (USA Today), the first novel in the brilliant series that inspired the acclaimed HBO Max series C.B. Strike. ​

After losing his leg to a land mine in Afghanistan, Cormoran Strike is barely scraping by as a private investigator. Strike is down to one client, creditors are calling, and after a breakup with his longtime girlfriend, he's living in his office.

Then John Bristow walks through his door with a shocking story: His sister, the legendary supermodel Lula Landry -- known to her friends as the Cuckoo -- famously fell to her death a few months earlier. The police ruled it a suicide, but John refuses to believe that. The case plunges Strike into the world of multimillionaire beauties, rock-star boyfriends, and desperate designers, and it introduces him to every variety of pleasure, enticement, seduction, and delusion known to man. 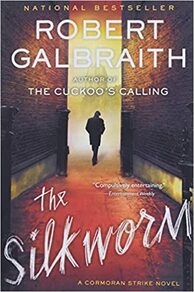 When novelist Owen Quine goes missing, his wife calls in private detective Cormoran Strike. At first, Mrs. Quine just thinks her husband has gone off by himself for a few days -- as he has done before -- and she wants Strike to find him and bring him home.

But as Strike investigates, he discovers that Quine's disappearance is no coincidence. The novelist has just completed a manuscript featuring poisonous pen-portraits of almost everyone he knows. If the novel were published, it would ruin lives -- meaning that almost everyone in his life would have motives to silence him.

When Quine is found brutally murdered under bizarre circumstances, Strike must race against time to understand the motivation of a ruthless killer, a killer unlike any he has encountered before . .

A compulsively readable crime novel with twists at every turn, The Silkworm is the second in J. K. Rowling's highly acclaimed series featuring Cormoran Strike and his determined young assistant, Robin Ellacott. When Robin Ellacott opens an unexpected delivery, she is horrified to discover that it contains a woman's severed leg.

Her boss, private detective Cormoran Strike, is less surprised but just as alarmed. He suspects that four people from his past could be responsible -- and any one of them is capable of sustained and unspeakable brutality.

With the police focusing on the one suspect Strike has essentially ruled out, he and Robin take matters into their own hands and delve into the dark and twisted worlds of the other three men. But as more horrendous acts occur, time is running out for the two of them . . .

Career of Evil is the third in J. K. Rowling's highly acclaimed series featuring private detective Cormoran Strike and his assistant Robin Ellacott. A fiendishly clever mystery with unexpected twists around every corner, Career of Evil is also a gripping story of a man and a woman at a crossroads in their personal and professional lives. 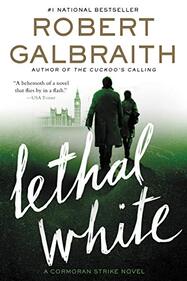 ​An unsettling cold case investigation ensnares Cormoran Strike and his partner in a web of dangerous secrets in this #1 New York Times bestseller, the inspiration for HBO Max's acclaimed series C.B. Strike.

When a troubled young man named Billy asks Cormoran Strike to help him investigate a crime he witnessed as a child, the private eye is left deeply troubled. While Billy is obviously mentally distressed and cannot remember many concrete details, there is something sincere about him and his story. But before Strike can question him further, Billy bolts from his office in a panic.
​
Trying to get to the bottom of Billy's story, Strike and Robin Ellacott -- once his assistant, now a partner in the agency -- set off on a twisting trail that leads them through the backstreets of London, into a secretive inner sanctum within Parliament, and to a beautiful but sinister manor house deep in the countryside. And during this labyrinthine investigation, Strike's own life is far from straightforward. His newfound fame as a private eye means he can no longer operate behind the scenes as he once did. Plus, his relationship with his former assistant is more fraught than it ever has been; Robin is now invaluable to Strike in the business, but their personal relationship is much, much trickier than that. The most epic Robert Galbraith novel yet, Lethal White is "addictive, murderous fun" for British mystery lovers and crime fiction fans alike (Vox). 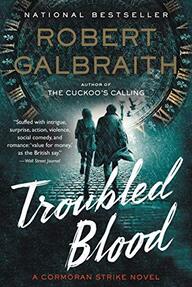 In the epic fifth installment in this “compulsively readable” (People) series, Galbraith’s “irresistible hero and heroine” (USA Today) take on the decades-old cold case of a missing doctor, one which may be their grisliest yet.

Private Detective Cormoran Strike is visiting his family in Cornwall when he is approached by a woman asking for help finding her mother, Margot Bamborough—who went missing in mysterious circumstances in 1974.

Strike has never tackled a cold case before, let alone one forty years old. But despite the slim chance of success, he is intrigued and takes it on; adding to the long list of cases that he and his partner in the agency, Robin Ellacott, are currently working on. And Robin herself is also juggling a messy divorce and unwanted male attention, as well as battling her own feelings about Strike.

As Strike and Robin investigate Margot’s disappearance, they come up against a fiendishly complex case with leads that include tarot cards, a psychopathic serial killer and witnesses who cannot all be trusted. And they learn that even cases decades old can prove to be deadly . . .